My chin tattoos. A personal reflection. 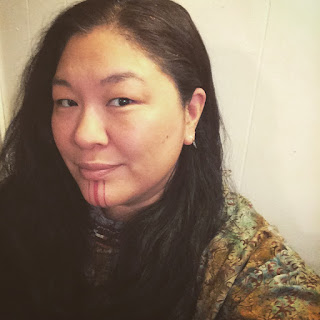 I've written a bit about my journey of coming to a homeostasis with my identity before in this blog, and now I have taken a pretty big step in that journey. A couple months ago I walked into tattoo parlor and asked to have my chin tattooed.

I have actually wanted traditional Inupiaq women's tattoos since I was a freshman in college.  After taking an introductory anthropology course where there was one page in the text book dedicated to our little culture it got me curious.  What other things do outside people say about our culture? One rainy afternoon I ventured to the university library and dug through the index card drawers for and hour, finding any and all references to my own culture.  There was no google back then.  I was left with about ten books that might say something, that might mention in a paragraph or two any reference to my home town or culture.  My excitement dimmed quickly as I pulled these books down from the shelves and realized that they didn't talk about my culture at all really...it was more like 'such and such scientist visited this place and saw stuff, lets talk about how awesome this scientist/anthropologist is'....no real detail.  Most referred to our people and culture using various words that meant 'barbaric' or 'going extinct.'  But in one of the last books there was a few old pictures from the first contact years, they were faded and somewhat blurry.  A few men, a few women, one with a child on her back.  Dark weathered skin looking like leather in the black and white photos, none of them smiled, looking stoic and somewhat tired.  I put it in the very small pile of books that might be interesting and checked them out of the library and took them back to my dorm.  Later I went back to the photos and saw that one of the older women had chin tattoos, almost hidden in the darkness of her skin.   The lines were powerful in their simplicity, in their presence.  I started crying.  In that moment I found something in my culture that spoke to me of beauty.  Of strength and bravery.  To me those tattoos were the epitome of how beautiful our culture could be, to completely shed the fear of being deemed less.  I think I cried because for once I found a something that was clearly and utterly of our culture, something not ever found in the western world.

It took a long time to talk to people about my secret dream.  About having chin tattoos.  And when I did I would get a mixed bag of responses.  Most would gaffaw or snort and tell me that it was dumb.  That only gang bangers had face tattoos.  Too impulsive.  Or squish their face in unconscious disgust and warn me how much that would ruin my life. That it would ruin my beauty (a somewhat racist remark? ) Others would tell me that they found them brave and beautiful too. But almost all would  tell me to wait.  To wait till I got older.  Some even told me that I couldn't get chin tattoos till I had children or grandchildren etc.  That I had to be an Elder, or that I could only get them done by hand, or that the church was going to come after me and burn me at the stake because only shamans had them (an actual thing said to me.)

So I waited.  And wanted. Eventually I had three lines on the back f my neck tattooed, a tattoo that I could hide if need be, but it always felt I was hiding more than ink on my skin.  So I waited.  For 20 years.

I decided to make them red.  Dark red. Old school chin tattoos were made by pulling soot and spit soaked sinew under the skin with a needle.  It left a blue black color.  For me though I wanted something modern. That was a combination of old and new.  Still Alaska Native Inupiaq, still speaking of our strong amazing ancestors but something that also spoke of my own journey, my own odd soul.  So I made them red.

I'm still getting used to them, oddly enough I forget that they are there most of the time.  My husband squinted a bit and said 'I like them'.  And that was it.  My baby girl, a toddler now with limited vocabulary, touched them for 5 minutes straight softly chanting under her breath 'pretty.'  For a while I was nervous because what if I eventually hate them?  What if I regret them?  What if I want to run for president of the United States?  But it hit me at some point to realize that the nerves I had were the voices that weren't even my own.  I guess becoming older has some benefits, as those nerves disappeared once I realized that I wasn't nervous about the tattoos at all, but instead I was re-playing those 'cautionary' statements over and over in my head. Like a inner chant of self abuse.  With age comes a lesser need of validation from the past.  At the end I realized that even without the tattoos I am still Native, brown on brown with slanted eyes smelling of tundra and caribou meat.

After getting the tattoos in the city I realized that I still had to do some shopping at the grocery store before I went back to the village the next day so I hopped into the car and steeled my nerves and headed to the local Fred Meyers.  The tattoos at this point looked at first glance like blood, I'm pretty sure it was a gory sight as they had yet to mellow out in color and ....shiny-ness.  They were bright red and gleaming with freshness.   I was so wrapped up into my shopping list that I was floored with the effects they had on people.  Non-natives tried not to stare....one poor man I asked for helping me find a certain kind of caramel stuttered and stood with a slack jaw staring at my chin.  Beads of sweat broke out on his forehead and he nervously rubbed his hands on his jeans.  Long awkward silences dominated our conversation as we both tried to deal with what was going on.  At one point I think I giggled and his face flushed red.  At that point I put him out of hi misery and thanked him and walked away.

A couple people asked me what they meant in my culture.  And to me this is the oddest question that I have gotten yet.  Because it implies that these cultural tattoos....in order to be accepted in society... have to mean something.  That our culture can't do anything just for beauty's sake, for aesthetic value or celebration.  That we as a culture might have different beauty standards.  These tattoos at their very core are a celebration of a woman's beauty and the proclamation of a cultural standard.  Back in the day they, along with other facial and body tattoos, were normal.  Abundant.  A celebration of woman.  A beautification of skin.  They could have many meanings, personal, spiritual, familial etc....but in the end they are simply the personal expression of the woman herself.

Odd.  And an awkward question.

I usually answer simply...'These are symbolic of the reclamation of our culture.'  And let them do what they will with the answer.  I think the permanence of the tattoo itself is what scares people. The marking of ones face, ones core identity, permanently is a foreign concept in the western world though it is pretty common in other indigenous world.  And it shocks people.  But the western world prides itself on not having permanent......anything.  It's a place of fleetingness.....the un-tied....the non-forever.  But I have endured years of racism at it's most obvious and it's most covert, and I don't think that my beautiful tattoos will alter that in any way....since I will never be able to change my historical culture nor my core appearance.  And at least NOW when I go through the store in a big city some random Alaska Native with brown skin and dark eyes like mine will smile a big toothy grin and reach a hand out and touch me lightly on the arm and tell me...'Your tattoos are BEAUTIFUL.'
Posted by Nuna Inua at 6:01 PM