Went for a short ride yesterday. This time of year the early mornings are shrouded in thick frosty fog that only clears up after the sun has been out long past noon. The dogs were especially exhuberant, as with the coming cold they had been spending more and more time inside their winter housing. I guess it's a type of dog 'cabin fever', which is identifiable mostly by the almost constant howling and fidgeting. We packed some hotdogs and snacks in a backpack and warmed up the snow machine and honda. 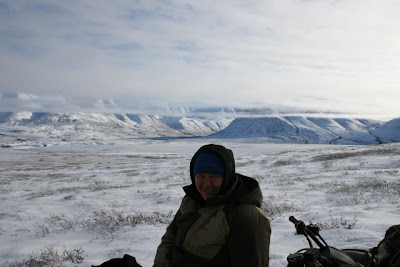 The fog had lifted and because of the heat of the sun it changed into a thin layer of victorian lace above our heads. The blues became intense and the snow sparkled and reflected every color like tiny glass mirrors. BIII took a quick picture of me while we waited on a hill for the dogs to catch their breath. 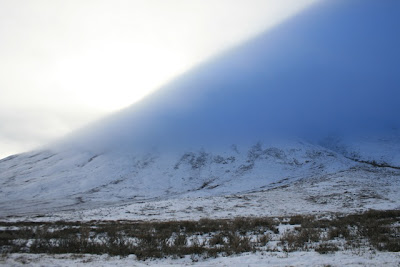 We entered a small valley called "Big contact", not expecting the show put on by nature. The mountain to our right glowed a unusual blue. An intense blue. 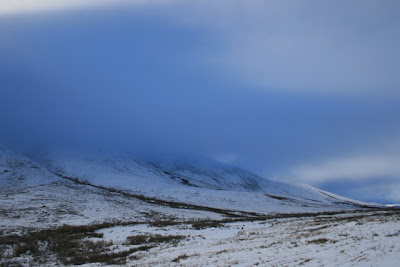 The mountain had gathered the fog amongst it's peak, and the blue sky above it was reflected in the bulk of moisture droplets. 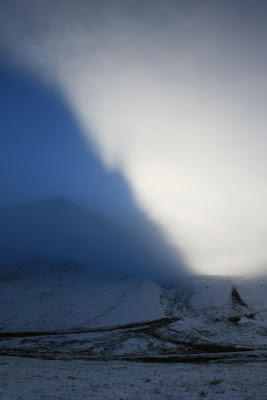 Farther in the valley we were greeted by a beam of light cresting over the mountain. I commented to my husband that it wouldn't be weird if a mythical beast arose out of this beam of light. Maybe the Dall Sheep Umailik (chief), or the Old Eagle Mother....or maybe even a ice gilded dragon. 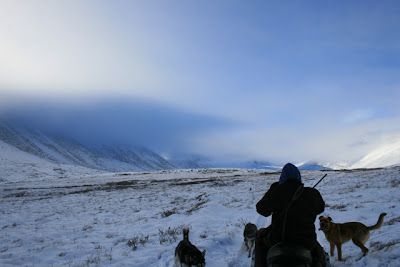 We stopped frequently to look far down the valley with binoculars. This let the pups rest and play, and gave us some time to make sure that a brown bear wasn't up ahead, and to make sure if there were caribou in our trail we wouldn't scare them.
When we reached the end of the valley we gathered some dried willow and made a fire, and roasted some hotdogs. We drank strong coffee and watched the dogs play tag in the dry and brown willow bushes. Mostly we just sat there and watched as the fog and mountains and sky dazzled us with a show of color and form and a game of peek-a-boo. It amazed me that if we had chosen to visit another valley this afternoon we would have never seen this amazing time and place. That the show would go unseen. That even now these displays of nature are existing, without being seen.
On the way back we were followed by a soot colored raven, he dove and clicked above us, his wings caught the air and hummed. I wondered if they were able to see beauty like we were, and if they were amazed by the valley like I was. They gathered in the village during the winter months, like a nomadic tribe, living off of the leftovers of man. Warming themselves on lamp posts and high powered light bulbs. They visited our house daily, looking for left over dog food or meat chunks. They would click at the dogs, attempting to calm them it seemed. Or they could be laughing.
Posted by Nuna Inua at 11:48 AM No comments: