Once in a great while I will send an order from one of my stores over seas. Australia, Ireland,.....Florida.... and other far away places. I love living vicariously through my own tiny packages, as I imagine them being opened in air that is so very different than mine.
A woman in Germany wanted me to send a bunch of stuff to her so that she could sell it in her brick and mortar store, so I send about 10 pieces. She asked for a short bio paragraph. Without really thinking about it I began with...'I am an Inupiaq Eskimo......'
A few days later she emailed me back with notes about this and that. She also told me that her friend who was Canadian was very uneasy about using the 'Eskimo.' Said it wasn't very politically correct. I googled it later and it seems that in Canada it is considered a demeaning and very negative racist word.
I emailed her back that I did not mind one way or the other.....that I would leave it up to her.
But it did spark a conversation. A few thoughts on the matter. I get all excited about these things because it's something I haven't really thought about yet.
Is the term Eskimo racist? Politically incorrect? And why do I find it so easy to use? Why did I even use it in the first place?
I first started thinking about what other terms I could identify myself and my artwork by. The absolutely first title I call myself by is Tikigaqmiut. It identifies where I come from, and it is one of the first things you learn as a child. I'm from Tikigaq, in English: Point Hope. Of course because of the internet my clientele 90% are not even from Alaska, and only about 5% are from the North Slope and would even know what that title would mean. I tried that in the begining, and spent most of my day emailing potential clients explaining to them what it meant. I debated on what my purpose was in selling my artwork online. I settled on it only being half explaining, and half selling. Which meant I would have to find another title.
I also found the same type of problem using the next broadest title: Inupiat, The Real People. too few people actually knew what that was. We span the whole entire North Slope of Alaska and yet the world knows so very little about us, and there is very little information on the internet (yet it is growing). I think the main reason is that we aren't really known for anything spectacular. Not like the more popular Apache or Mohican or any other tribal names whispered in American History for hundreds of years. We are only part of Americas newest history, not even old enough to make it in the high school textbooks yet. Google us and you will find a very small amount of national news or in depth coverage....mostly having to do with oil from Prudhoe Bay.
So what's next? Most artists I know identify themselves as 'Alaskan Native.' But it's such a broad term that it is ridiculous. Alaska is the largest state in the US, and can span from one coast to the other. There are 24 different Alaskan Native tribes in Alaska. Each separate and different from each other. The difference in culture between a Tsimshian and an Inupiat is amazing, a huge gap just as big as the difference between a New Yorker and a Texan. I had a person innocently ask me if I carve tiny totem poles once, and it made me consider changing my description once again.
The next step would be to just call myself 'Inuit'....as it would fit most of the requirements. It's readily identifiable due to the Inuit art movement in Canada, it also describes my Northern arctic culture and my work and materials. But I ran into a few problems with that title also. The first problem that first arose is that everyone assumed I was working out of Canada, as some did not know that Inuits span the arctic. Some people asked me where my stone work was. Some people critiqued me on not using proper traceable records keeping and marking that is common in Canada. In the end I decided that too much information was just as bad. As most do not know the difference between us and our Eastern brothers. I even had people tell me that they would have bought my stuff if I was Canadian Inuit, because Canadian Inuit is collectable and hip. My stuff wasn't 'Inuit' enough.........talk about a downer......
So I moved on to other titles.
The world has treated each group of Inuit natives completely differently. The U.S., Russia, Canada, ect. Each has it's own history and flavor (most of it is very depressing.) Some of it is still depressing. But each area moves at it's own pace and arrives at different things in different ways. And I think it would be wrong to apply one thing, to all the Arctic.....The Arctic peoples, though different, all have one thing in common, we adapt to change and survive. We are flexible and strong as willow branches..... and we hang onto the spare arctic soil just as faithfully.
And so in the end I stick with Inupiaq Eskimo....one word needing a little googling to understand, paired with another word readily identifiable. It's either that or Inuit - American - Alaskan Native - Inupiat - Tikigaqmiut/Nunamiut.......
Posted by Nuna Inua at 10:57 AM 11 comments:

I have come to the conclusion that if winter had a persona...she would be a young, vain, beautiful and fitful woman. Full of temper tantrums.
We have been experiencing big and bad snow storms. Which play havoc with the internet and prevents any outdoor activities. So for a couple of weeks now we have focused on making sure the dogs are comfortable, making sure nothing important gets buried till spring and trying our hardest not to succumb to cabin fever. My tactic is to go broke by downloading absolutely horrible and embarrassing Fantasy novels.
Sometimes though...the sky clears for a moment and we get to stretch our legs and enjoy the reprieve.
I don't have a date yet set for my knee surgery, so at this point it's a waiting game. I'm have high hopes that I might be able to go out and camp and hunt by late spring or early summer....that is if I have surgery in time. Till then I will hobble about the world.... writing bad poetry about my woes and cursing the woman Winter in her bi-polar attitude.
Some pictures! 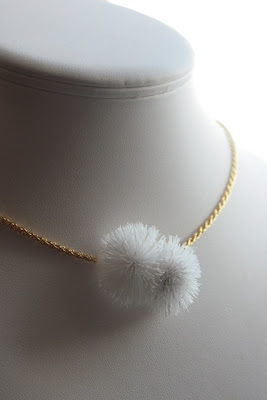 As an artist I experiment with materials and techniques alot. I decided one day to play with caribou fur and learn about tufting, which is a technique usually used by Northwest? Alaskan Natives with moose hair. I made an AbSOLUTE mess....but it was fun! It looked like a caribou exploded into tiny piles of fur in my living room. for more pics and info: www.salmonberrydreams.etsy.com 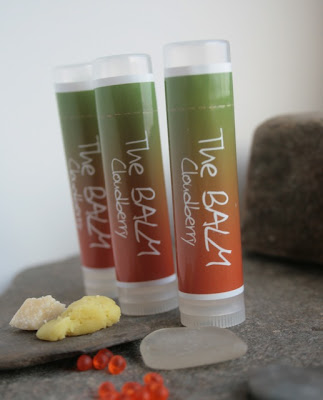 I also have made a 'for me' lip balm....made with Salmonberries......and have listed it up for sale at: www.salmonberryorigins.etsy.com 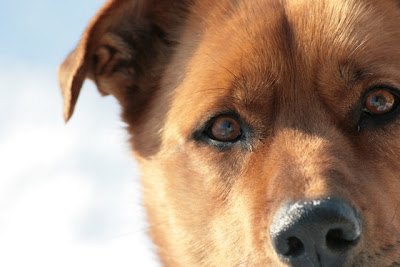 My dog Nuna peers around a corner, surprised, on a briefly sunny morning...as I have emerged from the house. 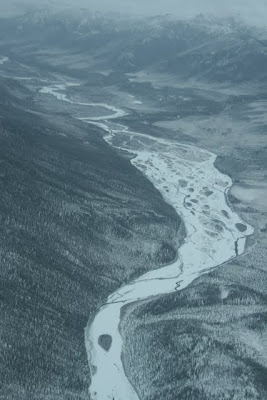 The view from my window on one of my flights to Fairbanks for knee appointments. 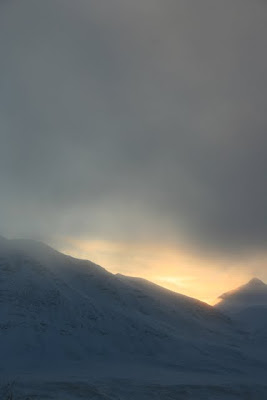 Sometimes there is no real difference from the sky and the snow covered mountains......but sometimes for a moment a difference appears and takes our breath away. I always find it so humbling to know that great beauty happens...wether we are there to see it or not.