I thought it was about time to do a good post on my tiny garden!

Here is a layout drawing of the plants I grew and the location of these plants. 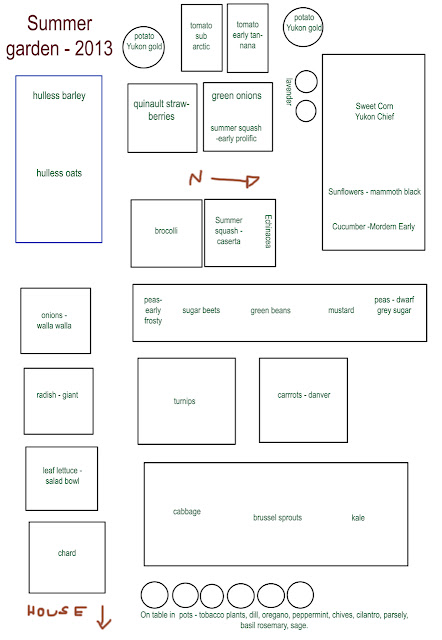 This year I decided to try and to begin to improve my soil from the get go.  Our soil here is very nitrogen and nutrient poor.  It also lacks organic material.  Most of the wild arctic plants grow in the thin topsoil layer that consist mainly of dead plant material and rabbit and ptarmigan poo and such.  This year I added a ton of coconut coir which was cheap to buy and ship and which expanded into larger quantities.  I also mixed in worm castings, a sprinkle of bone meal, blood meal, kelp meal, and a good quality organic fertilizer.  I chose to use organic enhancements in the hope that they would add to the soil in later years as well as this year.  I plan to add these types of stuff to the soil every year.

Last year I started a small compost bin, using the dead plants and home scraps, coffee leavings and such.  It is basically a 30 gallon plastic bin with a lid in which I have drilled a ton of holes.  I opened it up at the beginning of spring and was extremely surprised to get the wonderful earthy rich smell of awesome compost and steam.  I started another separate bin this year, and will add to that the chicken poo and straw and such.  I plan to let these bins sit for two years, so next year I can start using the compost.

I started planting seeds as soon as the soil was ready and warmed.  I cheated a little by covering the beds with cheap plastic, which helped to heat the beds and the seeds faster.  For the hot weather plants like the tomatoes and squash and peppers I made small sturdy tents out of plastic and placed them around large bottles of water to help keep them from getting too cold.  The only plants I lost were the winter squash, which really did NOT like the sudden drops in temp.

We started eating from the garden about three weeks ago.  It started with lettuce and herbs but now I can harvest things almost every day, the chickens have been loving the excess or damaged greenery.  The only problems I have had were mysterious insect holes showing up on my turnip leaves, a occasional rabbit wondering in and eating the chard (oddly enough the chickens go nuts and scare it away!), the occasional drop in temps, and a dog dumping out the lavender plants and killing them.

I have found that 90% of my plants absolutely do better in cooler weather.  We had couple weeks of 75-85 degree weather and though the herbs and sunflowers did okay, everything else went dormant and looked quite poor.  Then when the fall time coolness and humidity rolled in they came back to life in a frenzy.  The sweet corn did well in the heat but we got a drop in temp and it pretty much disabled the corn.  So I pulled the baby corn and replaced them with winter rye.

This year I also installed a rain gutter system, which was the absolute best idea ever! Last year I was hauling water in the hot spells from the nearby river to my water tank.  Which made interesting things grow in my beds.

Next year I plan to build a small greenhouse around the beds in the northwest corner of the garden.  I plan to put the corn, peppers and cucumbers an such inside. Since my husband was so incredibly sweet to me and built me the absolute best fully insulated chicken coop, I pretty much have to wait till next year to bother him again!

And now some pics!