I really am not ready for summer. It got to around 70-80 degrees this past weekend, a shock to my system! We spent four days camping near a still half frozen Anaktuvuk river, and watched as it visibly melted. At random moments you would hear the thunderous boom of heavy ice crashing into the fast moving waters of the river. It echoed oddly through the valley.
It got to hot for me. And the dogs who stood watch for bears. We all curled up in the shade of the tent and napped during the hottest parts of the afternoon. I found myself completely forgetting to take pictures during the whole trip, even though there was some neat things happening. We attempted to cross the river and ended up floating down the rabid river a bit, spinning in our argo with hundreds of pounds of camping gear. We hit a shallow bank down a bit and slowly crawled up to join the rest of the caravan, but I spent the rest of the afternoon making my husband promise we weren't going to floating anytime soon. Eventually we gave up and camped on high ground...away from the dense willows that hide the bears as they dig up and devour 'eskimo' potato roots...or as we call it....masu. Eventually we made our way to the same digging places, and dug some up for ourselves...armed with two alert dogs and a large pistol of course. And as these things usually go, nothing happened, except maybe the occasional screaming person running across the field to get away from the huge fuzzy ping pong ball sized bumble bees. There have been a noticeable amount of them this year, droves of them, like a wave of furry insect dominance. I always found it funny that we as a people in general are afraid of any type of large stinging insect. Even full grown nature hardened hunters will get squeamish around a good sized warble fly or wasp. 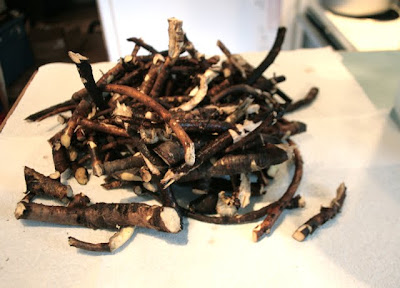 Our pile of masu we collected over the weekend. It tastes a bit like a sweet carrot. I like mine either soaked in seal oil with salt or boiled and lightly sprinkled with sugar. 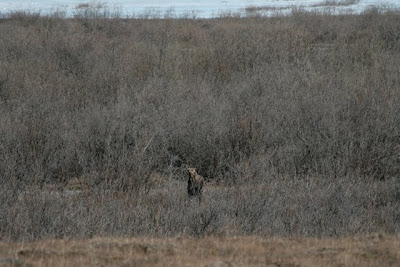 This moose stalked us the whole weekend. It would sit and stare at use for ages. Quite creepy. It did charge our camp a couple of times. The first time we started the argo and revved the engine, which worked. The second time it tried coming into camp while we were sleeping. The dogs heard it and sounded alarm. Hearing the dogs it decided to leave. At some point we also saw a bear standing in the willows, staring at us. It stood about 7 feet at least. For some reason I was more afraid of the moose than the bear! We had no idea why it was so interested in us! 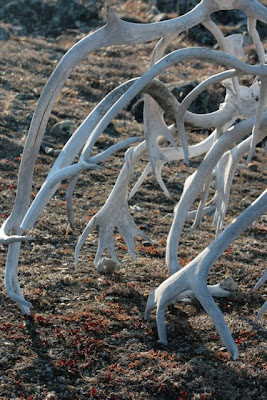 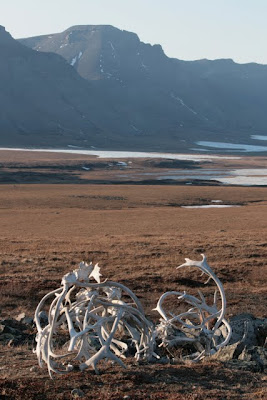 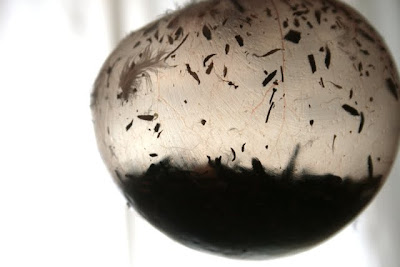 A phot that I thought I put up but I guess I didn't.....we took the crop of the ptarmigans we ate and emptied most of the food inside, then inflated them and hung them up and let them dry. You hang these in the house for good luck.
Posted by Nuna Inua at 9:56 PM 2 comments:

Random thoughts:
I love how most Inupiat hunters never actually say they are 'hunting'. As if the word itself is rude and might imply that you are not practicing good humility. Instead they say they are 'going to go and look' or maybe just 'go for a ride'......
Every season has a 'scent' to it......Spring is metallic snow drifting beneath melting loam. It is cold water and verdant gray plants bursting with a scent that reminds me of puppy breath and kitten fur. It is dust on dust on dust, with interludes of thunderstorms. It is not really a scent of awakening as most poets spout...it's more like the scent of Remembering...
I'm playing with the idea of selling herbal teas. Believe it or not me and my husband love drinking teas. We mix local plants with herbs I order online, and we love it. I have come up with several recipes that are tried and true and will be sending it off to my 'testers' this week. I will add some for sale later on to my store and see how they do! I'm always looking for way to 'modernize' old knowledge and this seems like a viable adventure. A facebook friend sent me a package form Canada a while back, it was a set of Iniut teas made from wildcrafted herbs that they sell in grocery stores across Canada. Very inspirational! Their website: Northern Delights Tea
Photo update.... 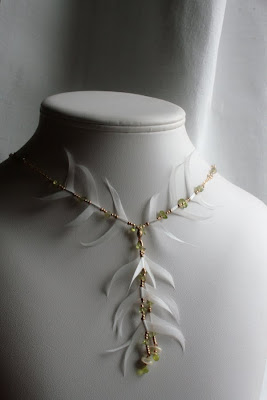 We do eat ptarmigan, and then I take the feathers and 'experiment' with them. This is a necklace I came up with. I did wear it around the house for an hour, worried that the feathers would tickle. They do not tickle. lol. more pics and info and other ptarmigan feather jewelry now up at: Salmonberry Dreams 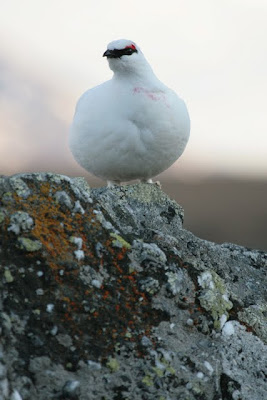 On our drive last night we came across a ptarmigan sitting on the rocks. He posed for me. I now have about 200 photos of this one ptarmigan. lol. His chest has bright neon pink smears on them, telling us that he had been eating last years cranberries. We suspected he had a nest nearby as he didn't go very far. 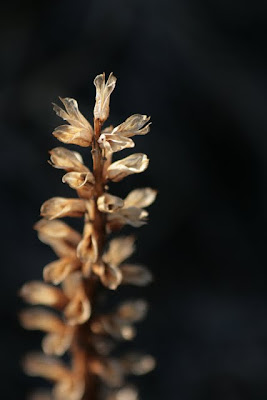 Winter stripped plants are everywhere. it amazes me sometimes to see such delicate fragile things still intact after the snow melts. 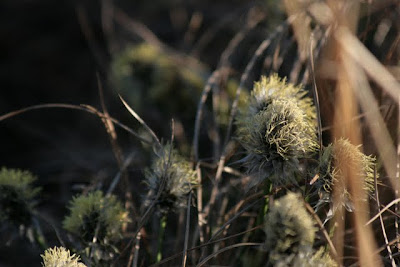 Took photos of this plant to look it up in my wild plant books. Neat and fuzzy! 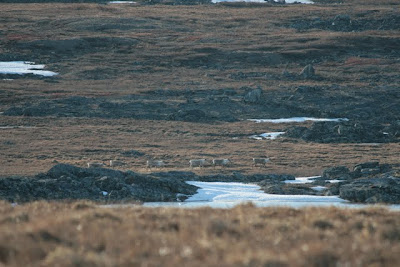 My husband did follow this small herd of caribou for a bit, but the opportunity to take one did not come about. This time of year they are migrating north, and will pretty much be gone from our neighborhood for the entire summer. So we are trying to fill our freezer (and help others to do the same) with enough to last till August.
Posted by Nuna Inua at 1:19 PM 1 comment:

Spring is here....sort of.....and I have been spending much of my time camping and exploring and enjoying the wonders of a melting world. My yard is a archeologists wonder, as layer after layer of snow melts to reveal things we have lost or have simply forgotten.
As a consequence it means I have less time to write in my blog....but on a up side it means I will post more photos! 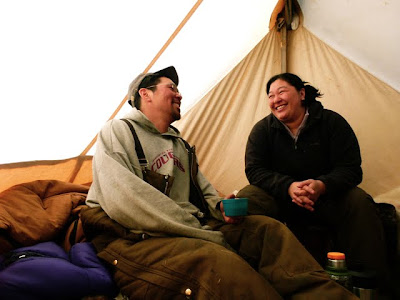 Me and my hubby enjoying coffee while camping. My brother is here visiting and so he got to take pictures! We had very cold weather all weekend......but still enjoyed the adventure! 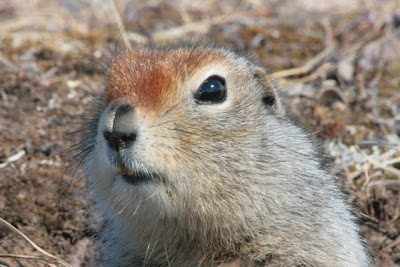 Our next door neighbor. 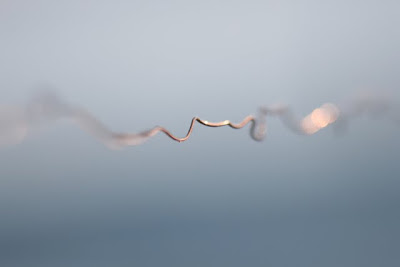 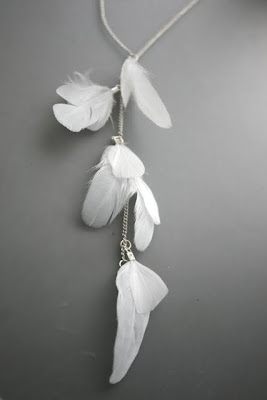 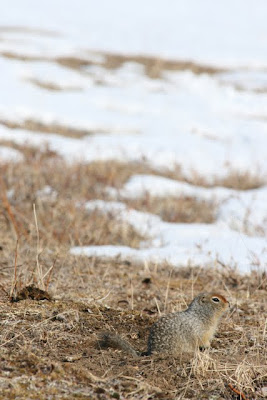 This should be called the season of the ground squirrels, as they have emerged to sun bathe and yell at us for trespassing. This one has a brilliant reddish stripe down his forehead. 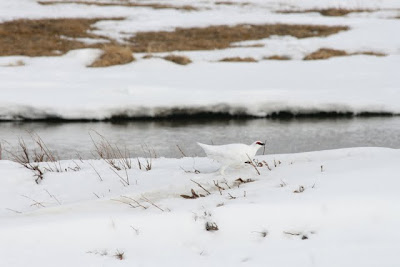 Along with the squirrels are the ptarmigan, they have descended upon this area in the hundreds of thousands. I did take a picture of a huge flock, but it looked like nothing more than bumpy snow. This guy is running his fastest to get by me, on furry claw feet. 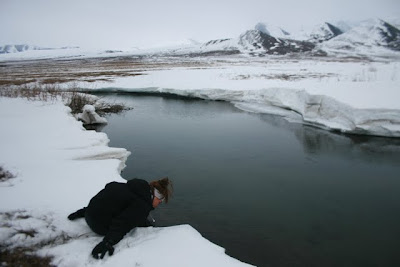 Some creeks never fully freeze over, such as this one. We stopped and checked for fish. 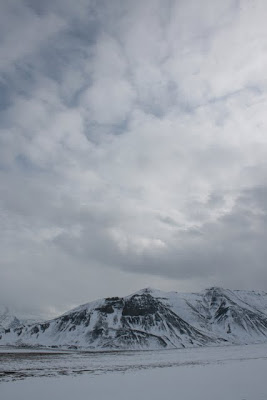 This time of year the weather is either blindingly bright or solemnly overcast. Your eyes get tired after a while from staring at endless whiteness. 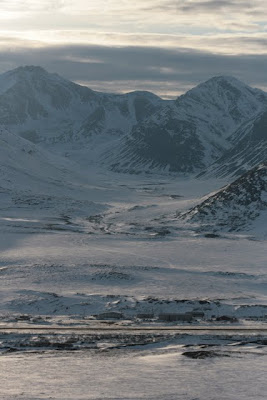 Here you can see part of the village....and behind it you can see down 'Big Contact' valley. We were high up a opposite mountain enjoying the veiw and some roasted caribou ribs over a willow fire....as a bunch of kids flew down the side in bright plastic sleds and the more adventurous adults tried their hand at snowboarding
Posted by Nuna Inua at 7:11 PM No comments: