My dogs bark alot.
I have four of them so it's a pretty intense experience. They become blurs of red and gray and brown and black fur....
They bark at people walking by, at vehicles, at other dogs barking in the distance, sometimes I'm not too sure what they are barking at. And it's not a sweet southern hound bay, but instead a harsh quick mouth and teeth showing bark. One filled with something primal dating back to when man first tamed wolf.
We trained our dogs to bark. To alert us to any movement or intrusion. To be brave and examine disturbances. It's the only way I sleep at night when I'm camping in the arctic wilderness. Because unlike most Lower 48 campers we hunt while camping, and we leave piles of meat near us, be it caribou or sheep or fish. All yummy, yummy things to wolves and bears. And the dogs are trained to be extra alert when meat is present.
Of course there is no "off" button unfortunately. So they bark a lot at home, outside in front of our house. Sometimes they bark at robins, and the other small songbirds h
oping to find a tidbit or two in our yard. They are very vocal beings, as sometimes they break into song and howl with throats raised to the sky. Cementing their bond with each other, or maybe just wishing there was something else to bark at.
It's a very odd opportunity to examine cultural differences. Between us and the western world.
I used to work at a veterinarian hospital in California where they also boarded dogs for long periods of time. My job was to feed and walk and medicate the animals, to observe and report on behavior. So I got to observe hundreds of dogs. Most were pure bred , with proud chests and hip problems. Most were house pets and companion animals, and trained not to bark at people, or at anything really. I found it interesting that when they barked they would look at me with guilty eyes, as if they just committed a social faux pas. Did you know that there is a breed of dog that cannot bark at all?
So when "Lower 48ers" pass by our home (and there are at least three plane loads a day of tourists in the warm months) and the dogs bark and bounce and cause general exuberant havoc I observe the people from our living room window. Most scoot across to the other side of the road, their steps slow, their eyes never stray from the mass of loud fur. Their nostrils flare and hands reach to cover mouths. The brave and/or young ones nervously smile and stop to take pictures of my barking dogs, maybe even cell phone videos, like our animals were some captured wild beasts, incredibly in the midst of humans.
I would imagine that they would think the dogs behavior uncouth and disruptive.
But when other Inupiat Eskimo walk by our home and they are greeted by our pack of noise they usually smile at the dogs, no hint of surprise mirrored on their faces. They usually find them amusing. Some even mention to me how good our dogs are, how perfect for picking berries or fishing or hunting and camping they would be. They are in a different way praised for their loudness. Some of the Inupiat stop and chat, not finding it odd that they have to yell above the barking. None of the Inupiat try to approach our dogs, because they know they are working.
They are very good dogs. 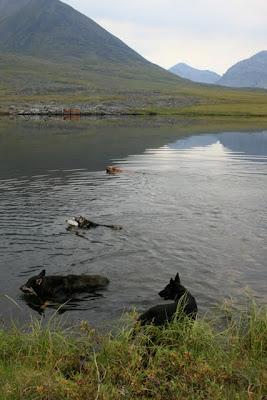