We had to say goodbye to one of our faithful furry friends today.  He had gotten loose from his cage and we found him behind the house suffering from what looked like poisoning.  He made it in time for us to carry him inside, where we held him and stroked his face and told him what a good boy he was till he left us.  I'm so grateful that he wasn't alone at the end.

Four years ago he showed up in our brand new (to us) yard here in Anaktuvuk Pass with a black Shepard mix as his shadow.  He came up to me and Ben and just decided, with a toothy husky grin, that this is where he was going to live.  We shooed him off and called the owners and brought him back across town over and over again.  But he would get loose and show up a day or so later, that same bouncing grin on his way too pretty husky face.  Eventually we asked the owners of the dogs to let him keep us.  And luckily they agreed.

I encourage people to never leave an open container of antifreeze ever, where animals can get to it.  From his symptoms I'm guessing that is what he got into, probably in a neighbors yard.  It smells and tastes like candy to dogs.

I have owned a little over 30 dogs in my lifetime.   And I have held about half of them in my arms as they took their last breath.  I am always humbled by these creatures and their capability to adore us, no matter what flaws we hold.  I always feel so incredibly lucky to get to know each and every one of them, and all their unique and one-of-a-kind quirks.  None of them are ever alike, like snowflakes.  Like smiles.

Bullet loved to greet me by pushing me over,  rubbing my leg with a happy growl.  When he would get excited he would jump straight up and down over and over like he was on a trampoline. He was always the saddest dog if we left him behind to go on trips, his howl was melodramatic and exaggerated.  He only really listened to Ben, but I never minded.  When we were going on camping trips or just for a run, he always had to be the lead dog, running at top speed to stay ahead of everyone.  He loved to chase squirrels, but never actually would try to catch them.  His best friend was our Kimbo puppy, and it always bothered them if they were separated for too long.  He loved little kids and was so incredibly gentle with them, he would even scold the other dogs if they so much as barked at them.  His right ear was broken at the tip and could hardly ever be held straight up like a proper husky.  He had a natural talent for pulling a sled and skijoring.  And he would always let Kimbo get a treat first, before taking one for himself. 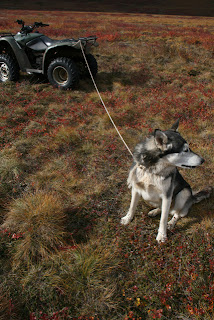 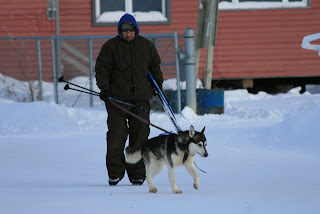 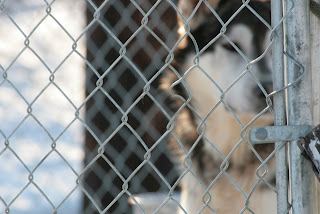